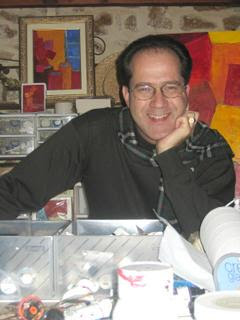 Born in Paris on November 18, 1964, Guillaume Villaros spent his childhood in the United States where his farther was appointed to an embassy position. During that time, Guillaume Villaros discovered the artistc and spiritual beauty of the wide open American spaces where nature's shapes and colors combine into vibrant and musical scenes. Upon his return to France, he studied Economics and graduated from Institut Supérieur de Gestion in Paris. Then he joined the financial department of France Télécom.Ever since he can remember, Villaros has benn fascinated by painting. He was struck by the Impressionist School and particularly admires Cézanne for his work on composition and his research on light. This great artist has been a model of perfection for Villaros and an inspiration in his own creative path.His mother regularly studied painting with Monique Baroni which brought youg Villaros into contac with the work and techniques of artists. Painting, first a form of play and pleasure, soon becomes Villaros' exclusive passion.His firts artistic efforts were spontaneous, but his work became more carefully constructed. In these paintings, the subject matter comes to life through his particular approach to light and materials. After the opportunity of working with Jeanne Bertrand - Morel, Villaros' paintings were exhibited for the first trime in 1991.Villaros creates a particular atmosphere in his paintings as he delves deeper into his research for the feeling an apple or a vase can engender trough their mere simplicity. His work is marked by harmonious drawing and color, balanced composition and serinity. Guillaume Villaros, through his classical works as well as his more modern ones, "is able to put the spectator in touch with desire and dreams". E.H. Emmanuel Hieaux: For what event was the “Coupe de fruits” conceived?
Guillaume Villaros: Every other year, gallery Thuillier proposes me an exhibition Thorigny st. in Paris. For the latest, it suggested I realize several paintings of big dimension. To paint " in big " offers another freedom; the gesture blooms in wide and ample movements which prolongs the incisive and contrasted line by the knife. If the subjects are often evoke the same composition, their story can differ as they are applied to a big or small “page”.

EH: The subjects of your paintings appear to those who observe them more sculptured than drawn. The vibration of your lights and colors becomes, in the course of the years, material.
GV: Yes. The work with the knife allows me to draw my subjects directly in the fresh paste, as a sculptor with the earth. Elements appear then in more or less dense reliefs and put together in a balance of compound masses of wide aplats.
EH: Do you feel close to Poliakoff?
GV: Yes, for the way he uses colors. I also admire Nicolas de Staël for his materials and his so powerful but purified compositions.
EH: Would your colors, all in tints and material, be the road which would lead you of the impressionism to the expressionism?
GV: indeed, the vibration of the color more than the outline of a motive is at the origin of my work. Without palette, directly on the canvas, I mix pigments (acrylic) in thin successive glacis. Little by little, it gives to elements and to subjects these vibrations and the returned transparency allows to bring the light of the inside of objects.
EH: Where do you exhibit at present?
GV: " Gallery A " at Montfort l’Amaury untill April 30th. And always the weekends in my workshop at “Bois l’epicier” near Houdan ( 78 )
Guillaume VILLAROS
06 81 24 63 58guillaume@villaros.com